We are proud of the Information Processing & Management Best Paper Award 2015 for our paper: A cross-benchmark comparison of 87 learning to rank methods. 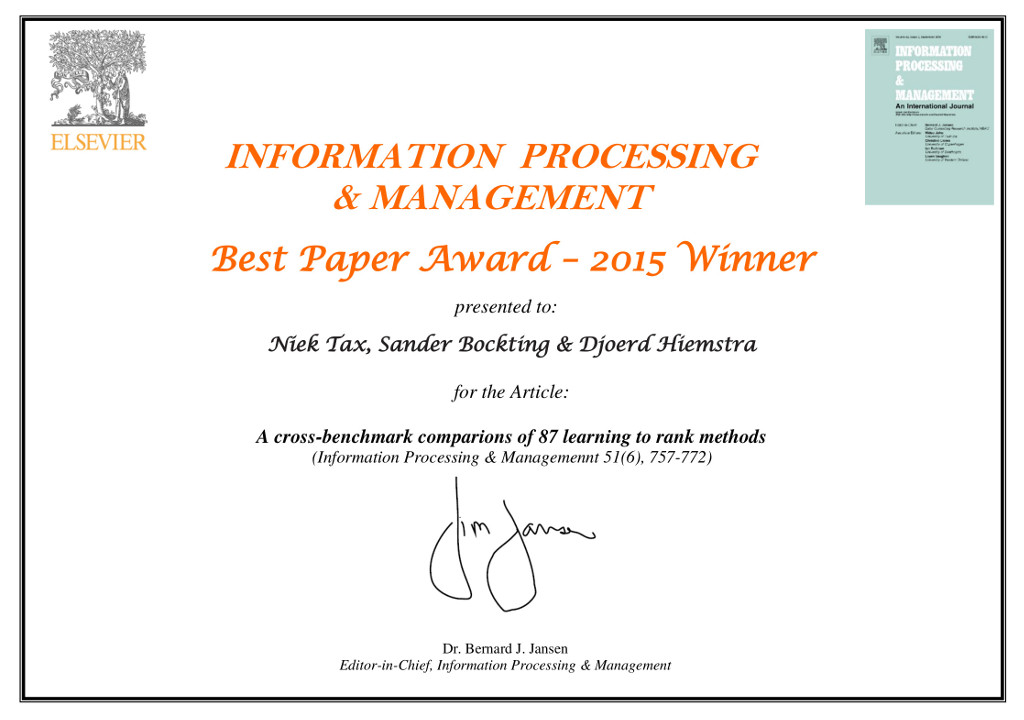 Machine Learning Research at the University of Twente focusses on the application of Machine Learning in Social Signal Processing, Biometric Pattern Recognition, and Text mining. Have a look at our new web site at: http://ml.ewi.utwente.nl. 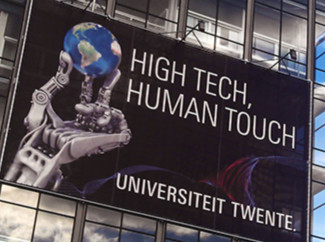 Dependence is a universal phenomenon which can be observed everywhere. In machine learning, probabilistic graphical models (PGMs) represent dependence relations with graphs. PGMs find wide applications in natural language processing (NLP), speech processing, computer vision, biomedicine, information retrieval, etc. Many traditional models, such as hidden Markov models (HMMs), Kalman filters, can be put under the umbrella of PGMs. The central idea of PGMs is to decompose (factorize) a joint probability into a product of local factors. Learning, inference and storage can be conducted efficiently over the factorization representation.
Two major types of PGMs can be distinguished: (i) Bayesian networks (directed graphs), and (ii) Markov networks (undirected graphs). Bayesian networks represent directed dependence with directed edges. Local factors of Bayesian networks are conditional probabilities. Directed dependence, directed edges and conditional probabilities are all asymmetric notions. In contrast, Markov networks represent mutual dependence with undirected edges. Both of mutual dependence and undirected edges are symmetric notions. For general Markov networks, based on the Hammersley–Clifford theorem, local factors are positive functions over maximum cliques. These local factors are explained using intuitive notions like ‘compatibility’ or ‘affinity’. Specially, if a graph forms a clique tree, the joint probability can be reparameterized into a junction tree factorization.
In this thesis, we propose a novel framework motivated by the Minimum Shared Information Principle (MSIP): We try to find a factorization in which the information shared between factors is minimum. In other words, we try to make factors as independent as possible.
The benefit of doing this is that we can train factors separately without paying a lot of efforts to guarantee consistency between them. To achieve this goal, we develop a theoretical framework called co-occurrence rate networks (CRNs) to obtain such a factorization. Briefly, given a joint probability, the CRN factorization is obtained as follows. We first strip off singleton probabilities from the joint probability. The quantity left is called co-occurrence rate (CR). CR is a symmetric quantity which measures mutual dependence among variables involved. Then we further decompose the joint CR into smaller and indepen dent CRs. Finally, we obtain a CRN factorization whose factors consist of all singleton probabilities and CR factors. There exist two kinds of independencies between these factors: (i) a singleton probability is independent (Here independent means two factors do not share information.) of other singleton probabilities; (ii) a CR factor is independent of other CR factors conditioned by singleton probabilities. Based on a CRN factorization, we propose an efficient two-step separate training method: (i) in the first step, we train a separate model for each singleton probability; (ii) given singleton probabilities, we train a separate model for each CR factor. Experimental results on three important natural language processing tasks show that our separate training method is two orders of magnitude faster than conditional random fields, while achieving competitive quality (often better on the overall quality metric F1).
The second contribution of this thesis is applying PGMs to a real-world NLP application: open relation extraction (ORE). In open relation extraction, two entities in a sentence are given, and the goal is to automatically extract their relation expression. ORE is a core technique, especially in the age of big data, for transforming unstructured information into structured data. We propose our model SimpleIE for this task. The basic idea is to decompose an extraction pattern into a sequence of simplification operations (components). The benefit by doing this is that these components can be re-combined in a new way to generate new extraction patterns. Hence SimpleIE can represent and capture diverse extraction patterns. This model is essentially a sequence labeling model. Experimental results on three benchmark data sets show that SimpleIE boosts recall and F1 by at least 15% comparing with seven ORE systems.
As tangible outputs of this thesis, we contribute open source implementations of our research results as well as an annotated data set.

To appear in November in Information Processing and Management 51(6), pages 757–772

Modern technology is more and more able to understand natural language. To do so, unstructured texts need to be analysed and structured. One such structuring method is geocoding, which is aimed at recognizing and disambiguating references to geographical locations in text. These locations can be countries and cities, but also streets and buildings, or even rivers and lakes. A word or phrase that refers to a location is called a toponym. Approaches to tackle the geocoding task mainly use natural language processing techniques and machine learning. The difficulty of the geocoding task is dependent of multiple aspects, one of which is the data domain. The domain of a text describes the type of the text, like its goal, degree of formality, and target audience. When texts come from two (or more) different domains, like a Twitter post and a news item, they are said to be cross-domain.
An analysis of baseline geocoding systems shows that identifying toponyms on cross-domain data has still room for improvement, as existing systems depend significantly on domain-specific metadata. Systems focused on Twitter data are often dependent on account information of the author and other Twitter specific metadata. This causes the performance of these systems to drop significantly when applied on news item data.
This thesis presents a geocoding system, called XD-Geocoder, aimed at robust cross-domain performance by using text-based and lookup list based features only. Such a lookup list is called a gazetteer and contains a vast amount of geographical locations and information about these locations. Features are built up using word shape, part-of-speech tags, dictionaries and gazetteers. The features are used to train SVM and CRF classifiers.
Both classifiers are trained and evaluated on three corpora from three domains: Twitter posts, news items and historical documents. These evaluations show Twitter data to be the best for training out of the tested data sets, because both classifiers show the best overall performance when trained on tweets. However, this good performance might also be caused by the relatively high toponym to word ratio in the used Twitter data.
Furthermore, the XD-Geocoder was compared to existing geocoding systems. Although the XD-Geocoder is outperformed by state-of-the-art geocoders on single-domain evaluations (trained and evaluated on data from the same domain), it outperforms the baseline systems on cross-domain evaluations.

Ranking Factors for Web Search : Case Study In The Netherlands

It is essential for search engines to constantly adjust ranking function to satisfy their users, at the same time SEO companies and SEO specialists are observed trying to keep track of the factors prioritized by these ranking functions. In this thesis, the problem of identifying highly influential ranking factors for better ranking on search engines is examined in detail, looking at two different approaches currently in use and their limitations. The first approach is to calculate correlation coefficient (e.g. Spearman rank) between a factor and the rank of it's corresponding webpages (ranked document in general) on a particular search engine. The second approach is to train a ranking model using machine learning techniques, on datasets and select the features that contributed most for a better performing ranker. We present results that show whether or not combining the two approaches of feature selection can lead to a significantly better set of factors that improve the rank of webpages on search engines. We also provide results that show calculating correlation coefficients between values of ranking factors and a webpage's rank gives stronger result if a dataset that contains a combination of top few and least few ranked pages is used. In addition list of ranking factors that have higher contribution to well-ranking webpages, for the Dutch web dataset (our case study) and LETOR dataset are provided. 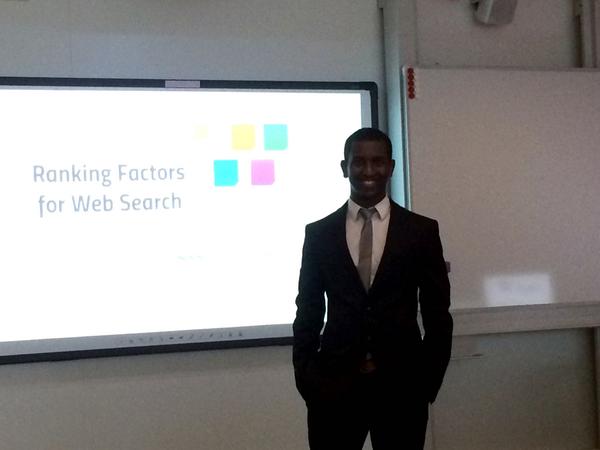